Explore the Holy Religious Site of the Himalayan Country Nepal

Nepal is the abode of gods and goddesses. There is a popular saying that Nepal has more temples than houses and more gods than people. Irrespective of your religious faith or doctrine, Global Adventure Trekking invites all of you to join its Pilgrimage Tour, designed to provide you with inner peace, prosperity and spirituality.

Our Pilgrimage Tour starts with a visit to Lumbini, the birthplace of Buddha, in Southern Nepal. A world heritage site, Lumbini hosts tremendously important archaeological sites from the period of Buddha such as nativity stone, Mayadevi pond, palace ruins of Shakya palaces, Ashoka pillar etc. Today it is being developed into the world’s peace centre containing meditation centre, world peace stupa, international monasteries, crane sanctuary, Buddhist library and so on.

After Lumbini, you will drive Pokhara via Tansen and Sirubari. Tansen it the ancient kingdom of Sen (Magar) people and a beautiful location to view mountains and green hills. Sirubari, on the other hand, is the first village tourism destination of Nepal featuring Gurung culture, organic produce and natural bliss. One in Pokhara, the city of lakes and mountains, you will be able to capture spectacular views of Annapurna and Manaslu ranges along with exploration of bat caves, waterfalls and lakes.

A short flight from Pokhara takes you to Jomsom and Kagbeni, the ancient towns of Thakali community. Trek through Kali Gandaki valley the world’s highest Kali Gandaki Gorge and enjoy towering views of Annapurna and Dhaulagiri. Revered by both Buddhists and Hindus, Muktinath or Chumig Gyatsa (3800m) is a holy religious site in the Himalayan region. The site hosts a temple of Padmasambhava, an eternal flame and108 stone spouts.

Please feel free to let us know about your requirements and timing for further adjustment.

Day 01: Arrivals and transfer to hotel

Our airport representative greets you at Kathmandu Airport (TIA) upon your arrival and transfers to Hotel. In the afternoon tour briefing followed by a stroll around the local market.

Our trip starts at 9 AM after breakfast. You will visit some exotic sites in Kathmandu.

Boudha Nath Stupa: The largest stupa in Nepal and the holiest Tibetan Buddhist temple outside Tibet. It is the centre of Tibetan culture in Kathmandu and rich in Buddhist symbolism.

Pashupatinath Temple: Nepal's most sacred Hindu shrine and considered one of the greatest Shiva sites, is located on the banks of the Bagmati River five km north-east of Kathmandu Valley

Monkey Temple: Swayambhunath is an ancient religious complex atop a hill in the Kathmandu Valley, west of Kathmandu city. It is also known as the Monkey Temple as there are holy monkeys living in the northwest parts of the temple. like Pashupatinath temple, Boudhanath stupa and Swoyambhunath. From the top of Swoyambhunath, you get a great view of the entire Kathmandu valley.

Day 03: Fly from Kathmandu to Bhairahawa and drive to Lumbini

Enjoy a short morning flight to Bhairahawa and then drive an hour to Lumbini. Once in Lumbini, our staff will you take you to the hotel. Later on, observe Lumbini gates and surrounding areas.

Day 05: Drive from Lumbini to Pokhara via Sirubari

Day 06: Fly to Jomsom and hike to Kagbeni

Morning flight to Jomsom followed by a short hike to Kagbeni. The path goes along holy Kali Gandaki river. Kagbeni is ancient town settled by Thakali people who are known for their trade acumen and culture.

Day 07: Hike to Muktinath and drive back to Jomsom

Morning hike to Muktinath where is a Buddhist temple dedicated to Padmasambhava. Hindus also regard it as the temple of Lord Bishnu. Take a bath on 108 Mukti Dhara, holy water spouts. Taking bath under all these 108 Muktidhara is believed to bring salvation and rinse away your sin.

You get out of Jomsom by flight to Pokhara. Once you reach Pokhara, you will be transferred to your hotel. Then explore the major attractions of Pokhara Valley. We visit Davis fall, Gupteshor Mahadev Cave, International Mountain Museum and Tibetan Refugee Camp.

Day 09: Pokhara drive back to Kathmandu

Have breakfast and then drive back to Kathmandu, which takes approximately 6 hours and transfers to Hotel. Optional 30 minutes fly from Pokhara with additional cost.

After having the hygienic breakfast we will transfer you to The Kathmandu Airport with a private vehicle for your final departure.

Nepal Pilgrimage Tour package departs on a daily basis. Please feel free to write us with your query any aspect of this tour or your suitability. 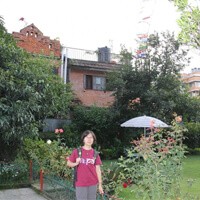 10 day's in Nepal are happy

I’m a Chinese. I come from Beijing. My husband and I spend 10 days in Nepal. It’s a wonderful and ...