The most beautiful fresh water lake in Khumbu region

Gokyo Lakes Trek is one of the most sought-after trekking routes in the Khumbu region of Nepal. The trek leads you to Gokyo Lakes, the world's highest freshwater lake system encompassing main six awe-inspiring, dazzling turquoise lakes. Gokyo Lakes Trek involves a walk through the off-beaten paths of the Khumbu region amid snow-clad mountainous terrains and astounding wilderness. It is a fun-filled walking journey in the Solukhumbu district of Sagarmatha Zone in north-eastern Nepal. The trek is an amalgamation of adventure, exploration, and celestial natural beauty that'll surely leave you with a heightened feeling of fulfillment and pleasure.

The impeccably clean, emerald-green lakes owe their striking color to runoff from surrounding glaciers. These are freshwater wetlands lying at an elevation of 4700-5000m that feed on high-altitude glaciers. Gokyo Lakes Trek delivers you a great sense of the vastness of nature and a sense of calm and clarity to soothe your soul. The idyllic views of glistening lakes in the lap of gigantic, glorious mountain ranges are a pleasant sight to behold.

We, Global Adventure Trekking, offer you a 13-day Gokyo Lakes Trek package. In this 13-day trek, you'll delve into the peaceful serenity of calm-glacial lakes and relish captivating views of the world's highest mountains. You'll be awestruck at the sheer size and authenticity of these sparkling alpine lakes in Gokyo valley. The background of majestic white snow-filled mountains adds to the allure of freshwater allure and refines your Himalaya experience.

Beyond the astounding Himalaya aura, you'll also feel the strong influence of Hinduism and Buddhism in the Gokyo area as the place is highly believed to be sacred. Get spiritual healing and a sense of rest from overstimulation in this serene and religious atmosphere.

Gokyo Valley, home to oligotrophic freshwater lakes, lies within the Sagarmatha National Park area at the base of Gokyo Ri. Gokyo Ri (5,357m) is the vantage point that overlooks the  Mt. Everest Massif range and provides a mesmerizing view of four 8000m peaks along with turquoise-colored Gokyo Lakes. Explore the raw appeal of Mount Everest, Lhotse, Makalu, and Cho Oyu (8,201m) from the summit of Gokyo Ri with your naked eyes. Besides, it is also possible to possible to observe the divine beauty of Ngozumpa glacier, the longest glacier in the Himalayas from the top of Gokyo Peak. The 3.6 km long glacier lies below the sixth-highest mountain Cho Oyu and feeds a high-altitude freshwater lake system.

Gokyo Lakes Trek is an alternative route to the utterly commercial trekking path of the Everest Base Camp (EBC) trek and a slightly off route while visiting EBC. You'll be able to explore the uncongested Gokyo trail amongst a few crowds and interact with locals freely.

The Gokyo Lakes Trek follows the classic EBC trail until Namche and then traverses Sagarmatha National Park while diverting towards Machhermo. You'll walk through one of the most picturesque off-the-beat routes in the Everest region, crossing patches of birch and rhododendron forests. The trek involves a gradual ascent up the valley along varied and verdant landscapes to finally lead you toward the hidden gem of mountains in form of lakes.

In the valley, you'll hike up approximately 4 hours to summit Gokyo Ri for a rewarding sunrise view. The Gokyo Trek route ends with a steep climb up to Gokyo Ri at an altitude of 5,357 meters. As the trek is in-and-out, you'll have to retrace the step back to the trailhead once you've reached the endpoint.

After savoring the magnificent beauty of Gokyo Lakes in their enchanting attire and the alluring backdrop of gratifying mountains in Gokyo Ri, you descend to Namche Bazaar. You'll spend the concluding days of adventure in a delightful Sherpa village to sample their wonderful hospitality and get an insight into their way of life.

How difficult is Gokyo Lakes Trek?

Gokyo Lakes Trek is an adventurous and extreme experience; a challenging feat that requires at least 5 hours of walking in a day. As you trek up the trail in high-altitude mountain surroundings, you'll encounter rugged terrains and uninhabited areas. It's a bit of a struggle to spend several days in the mountain wilderness, far from the comforts of modern life. It requires a great deal of motivation and enthusiasm + a general stamina level to accomplish the trek.

The Gokyo Lakes Trek involves multiple steep climbing sections and the ice ridge between Cho Oyu and Gyachung can be really challenging. As you are about to embark on a trek that reaches as high as 5,357m, there is a possibility of getting altitude-related sickness. If everything is well you may choose to Renjola pass trek to Thame and Namche Bazaar.

Fret not Û our itinerary of Gokyo Lakes Trek includes an acclimatization day to let your body adjust to high altitude. The number of nights spent above 4000m on this trek is less than on the Everest Base Camp trek. Besides, we have experienced leaders and Sherpa porters to guide you throughout the journey and ensure your safety.

Stay fit and prepare yourself mentally for the trek. The frequent elevation gain can be physically and mentally exhausting, but once you reach the top and taste the incredible mountain essence, you'll realize that it is worth the effort.

As with the majority of treks in high-altitude regions of Nepal, the best season to undertake the Gokyo Lakes Valley trek is March-May (Spring) and Mid-September to November (Autumn). Although Gokyo Valley receives visitors throughout the year, the weather is not quite stable during the monsoon and winter seasons. The warm and humid conditions, messy trails, and considerable rain make monsoon season an unfavorable time to undertake Gokyo Lakes Trek.

Similarly, the winter season is characterized by significant temperature drops, a high chance of snowfall, and foggy weather in the valley. But the trail is less crowded and has a super nice view in this season, allowing to you trek into the peaceful environment in your own spirits.

Day 01: Arrival and transfer to Hotel in Kathmandu

Upon arrival at Kathmandu Airport, our airport representative will welcome you to Kathmandu and directly drive to Hotel.

Morning flight to Lukla and start the trek through Sherpa village. The trail goes gradually flat and easy to Phakding.

Today, you are trekking about 800m uphill. Crossing the suspension bridge walking through pine and juniper forest and the first encounter with Mount Everest, Amadablam, Thamserku, and many more.

Trek begins very easily first part then the trail goes uphill to Mongla Danda which is on the top of the Hill. The views are amazing! Descend 300m to Phortse and easy uphill to Dole through pine and Rhododendron forest.

Facing the dramatically rising peak through the old alpine and moss-covered Rhododendron in the first part. Machermo lies in the Dudh Koshi river north of Dole and South of Gokyo Lake at an altitude of 4,470m. The path is well-maintained and easy.

The trip to Gokyo is so beautiful and makes a charming start to the day. From phanga descend to the river and climb steeply to the first lake. The second and third lake is not far from each other.

Hike up to Gokyo Ri 5410m takes about 2.5hrs. This is the most remarkable viewpoint in Khumbu. The view offer Cho Oyu, Everest, Lhotse, Makalu, and many more Mountain range. Hike back to the lodge and trek to Panga overnight.

Hiked down to Machhermo and Dole as the descent is more easy and faster and easily you can do it. Khumjung is another hidden valley in the Everest region. Visit the Monastery and Hillary School in the morning.

Path goes mostly descending through the alpine forest. Once pass Phortse Thanga the path goes steep uphill to Mohan Danda then easy path to Namche through the ridge.

After the breakfast, Gradually downhill walk through the Sherpa village and few times cross the suspension bridge over the Dudh Koshi and reach Lukla about 2 PM.

Fly to Kathmandu and transfer to Hotel. Afternoon is free, Evening farewell dinner at the typical Nepalese restaurant.

Depart to the Airport for your onward flight

Trek as an Individual, Private Group or Join a Scheduled Trek:

Global Adventure Trekking specializes in organizing treks for individuals, couples, and small groups. You can trek by yourself as a private group on the date you select without paying extra, or you can choose to join a small group that is scheduled during your preferred time frame. We also now and then arrange groups regulary so feel free to contact us to inquire about other possible dates for group treks that you might be able to join.

Day 1 means arrival day in Kathmandu. Gokyo Lake trek can be done in fewer days but is not recommended because of the altitude sickness. You should be well acclimatized to go up to the top.

Accommodations during the trek:

We seek to offer our clients comfortable and clean private accommodations. We always make sure that you can sleep well. We always provide you with the best available lodge/tea-house during the trek. Most of the nights, there will be a warm dining room with comfortable chairs. Normally, you will have electricity throughout the trip, but there may be a few nights where there is no running hot shower and electricity. The electrical outlet is not available in the room you have to charge your camera/Phone in the dining room. A bucket of hot water will be offered for an additional cost.

Hotel in Kathmandu- A clean and comfortable hotel in a quiet location beside Thame. There is 24 hrs hot and cold shower with a TV. Air-conditioned, Telephone in the room with private balcony. Kathmandu we provide you with a 2/3 star category hotel. However, if you would like to upgrade the hotel in Kathmandu, please let us know. We will upgrade the hotel for an additional cost.

Travel transport: As you are going for your Adventure activities on the Gokyo lake trek, We provide private transport to and from the airport. Ktm-Manthali airport by bus and fly to Lukla and back the same.

Sample food in the mountains to avoid the sickness:

These are the most served food in the Himalayas. Still, there are many more….

Altitude sickness is a hazard, including on the Annapurna, Langtang, and Everest Base Camp treks and more... Please make sure you familiarize yourself with signs and symptoms before you leave and observe your own health during your trek.

Altitude sickness is a life-threatening fetal disease. Higher than 2,500m are at a risk of altitude sickness even though they are physically fit. It is important to be aware of these symptoms you may encounter.

If you are feeling nauseous, dizzy, or experiencing other symptoms please share with your group and guide for the necessary evacuation.

Travel Insurance is compulsory for our Everest region Trek. Make confident your insurance covers you for your planned activities, including travel and trekking above 3000m if this is included on your itinerary, mountain rescue services, and helicopter evacuation costs.

I booked the Gokyo Lake Trek Guide and the transport (Bus to Shivalaya and flight from Lukla). The trekking agency Global ... 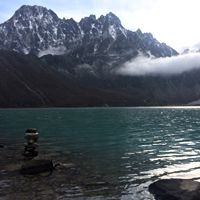 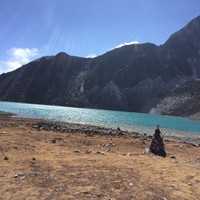 From the moment I got picked up from the airport by Krishna the M.D. of global adventure trekking, I could ...